Freedom has finally come the way of Taiwo Oluwatoyin Akinbode, the abducted twin sister of famous gospel music singer,  Kenny K’ore of the Olorioko fame.
She was whisked away by men of the underworld few days back on her way to Port Harcourt for a job interview with her intending employers.
The dare-devil kidnapers had placed a N5m ransom tag on her.

Her brother, Kenny took to his Facebook, Wednesday morning to break the cheering news to his fans and well wishers.
Hear him, “As abruptly, and unbelievably as it started, it ended.

My kidnapped sister has been rescued, and is back home.

When all else proved abortive, EXCEPT PRAYERS, it was the services of a private security agent that saw to it that she was released without harm to her, and without a ransom paid.
She’s being taken care of by our family, and we’re positive she’ll be back on her feet, stronger, and better for all her ordeal in Jesus Name.

The Akinbode family is grateful, and deeply indepted for the prayers, the love, the financial help and otherwise, that ordinary people, (most who do not even know Taiwo), showed towards our trial of faith, indeed the people’s voice can be the voice of GOD.

Like Daniel, Taiwo Oluwatoyin Akinbode, was not delivered from the lions den, she was delivered in the lion’s den, that our enemy might publicly be shamed again, and GOD may be glorified.
‪#‎The‬ Storm is over/His peace remains
READ YOUR BIBLE, MEDITATE, PRAY, AND OBEY GOD…Kuorire 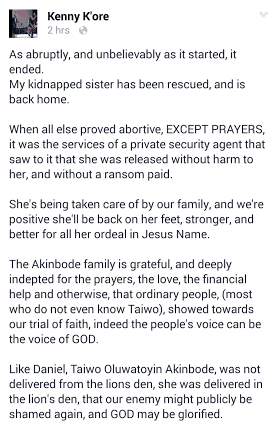